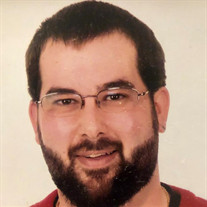 William James “Trey” Froy, III gained his angel wings on Sunday, January 30, 2022 after a brief illness. Born July 24, 1983 in Bluefield, WV Trey was affectionately known to some as “Tree Frog,” to some as “Trey-Baby” and to others as “Harley,” he was the kindest of souls. He was a hard worker and always wanted everyone to be happy. His disagreements never went much further than “Naw Man.” Trey had an Elvis grin, a snarky commentary and a quick wit. Trey leaves behind a fierce love and protection for his family and his sweet strength and selflessness for us all to learn by. Trey attended Graham High School and was a graduate of Camp Beauregard in Pineville, Louisiana. Trey lived most of his life in Bluefield, WV and Wytheville, VA however he also lived in Fresno California, Ferriday Louisiana and most recently Surfside Beach, South Carolina. Trey was currently employed with Myrtle Beach Harley Davidson and was a former employee of Cole Harley Davidson, Bluefield, WV and Wytheville Harley Davidson, Wytheville, VA as a Certified Master Technician which he obtained from Harley Davidson University. Trey had a lifelong love of motorcycles and cars. Left to cherish his memory are his parents Susan Stalians and William James “Jimmy” Froy, Jr. & Bonus Mom, Deborah Froy. Siblings Morgan and Antonio Froy. Maternal Grandfather Fred Stalians. Bonus Grandparents “Franma” (Frances Ameli) & Nick and Jeanne Ameli. Aunts and Uncles Lorraine Stalians, Gayle and Jim Burnnett & Scott and Carolyn Stalians. Bonus Aunts & Uncle, Carol Ameli Havens and Dan & Carrie Ameli. Numerous cousins. Special “Uncle Hot Dog,” Daniel Frost. Girlfriend Stephanie Helms and her children Caleb, Carter and Haylie. He was preceded in death by his paternal grandparents William James “Jim” Froy, Sr. and Sabra Ellen “Ruth”Froy and his maternal grandmother Peggy Stalians. A celebration of Treys life will be held on Friday, February 4, 2022 at Mercer Funeral Home. The family will receive friends from 12pm until 2pm. Funeral service will be at 2pm with the Reverend Ray Amos officiating. Entombment will follow at Woodlawn Memorial Gardens. Serving the family as pall bearers will be: Daniel Frost, Rick Jackson, Edd Barrett, Kevin Bidinger, Mike Shrader and Eric Squiquero. The family requests masks be worn for the safety of all in attendance.

The family of William James (Trey) Froy III created this Life Tributes page to make it easy to share your memories.

Send flowers to the Froy family.