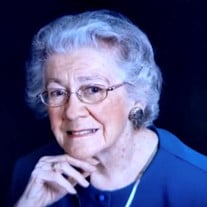 Velma Lee Caldwell of Bluefield, West Virginia March 11, 1928 – January 21, 2022 VELMA LEE CALDWELL, 93, of Bluefield, West Virginia, went home to be with her Lord and Savior on Friday, January 21,2022. Born on March 11, 1928 in Bluefield, West Virginia, she was the daughter of the late George W. and Nora Jane Patton Brooks. She graduated from Bluefield High School and was a life-long resident of Bluefield. Velma Lee was a precious Godly woman who spent her life in service to the Lord. She and her husband were founding charter members of East End Baptist Church which she attended through the church merging with College Avenue Baptist Church and where she held a number of positions over the years. She taught Sunday school from pre-school to adults at one time or another, was the Sunday school superintendent, vacation bible school coordinator, circle leader, church treasurer and missionary offering director. She was active with WMU and Baptist Women. Velma Lee had a love of music and a beautiful voice and she shared her gift by singing in a trio with Betty Quick and Loretta Harvey in addition to leading the church choir. Her service extended beyond the walls of the church as well where she served on the Union Mission Board and had the distinction of being the first female president of the West Virginia Mountain State Baptist Association. Outside of her church life, Velma Lee was a homemaker who loved to cook and hosting family and friends at her home. She had a love of crafting and enjoyed traveling with her family. She is preceded in death by her husband of sixty-two years, John Caldwell; son, Darrell Caldwell; sister Myrtle Brooks and brother, Ray Brooks. She is survived by her sons, Duane and Margaret Caldwell of Bluefield, West Virginia; Danny Caldwell of Washington, Pennsylvania; daughter-in-law, Nancy Caldwell Slade of Bluefield, West Virginia; four granddaughters, Monica Crandallof Princeton, West Virginia; LeAnn and Grat Slade of North Tazewell, Virginia; Paige Caldwell and Sam Hutchison of Durham, North Carolina; Melanie Caldwell of Bluefield, West Virginia; six great-grandchildren, Addy; Macie; Zach and Zander Slade; Trey and Rowyn Crandall; sister-in-law, Sue Brooks; two nephews, Ralph Grinstead; Byron Ray “Chuck” and Delores Brooks; three nieces, Ronda and Robert Paynter; Janie Stayley Johnson; Tammy Sue Brooks Karnes; three great nephews; two great-great nephews and two great-great nieces. Funeral service arrangements for Velma Lee are currently incomplete at Mercer Funeral Home in Bluefield, West Virginia.

The family of Velma Lee Caldwell created this Life Tributes page to make it easy to share your memories.

Send flowers to the Caldwell family.