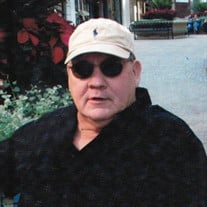 Timothy Richard Rutherford, 75, died peacefully at his home in North Tazewell, Virginia on Tuesday, March 22, 2022. He was the last surviving member of his immediate family. Born in Bluefield WV, he was the son of the late Earl Forrest Rutherford and Mary Ruth McHaffa Rutherford. Tim was a graduate of Graham High School in Bluefield Virginia. He was team member of the 1962 Virginia State Football Champions, going on the Bluefield State College on a Football Scholarship. He was the founder of Rutherford and Company LLC, manufacturing mining equipment and selling to all industries Nationwide. He was also the founder of TRC Mortgage Company in Tazewell Virginia. Tim was a great contractor, being very proud of the beautiful home he built for his family. Tim also served in the Army Reserves from 1967 - 1973. In addition to his parents, Tim is preceded in death by a brother, Earl Forrest Rutherford Jr, sister, Mary Ann Meador, and nephew David Rutherford. He is survived by his loving wife and caregiver, Nancy C. Peery Rutherford of North Tazewell, Son, Bradley Rutherford and Wife Laura of Christiansburg, Grandchildren, Evan Bradley Rutherford and Natalie Adair Rutherford of Christiansburg, nephew, Keith Rutherford of Port Richey FL, nieces, Julie Rutherford Cobb of Knoxville TN, Ashley Meador Forinash of Morgantown WV, and Alisha Meador Warren of Jacksonville FL. In honoring Tim's wishes, the body has been cremated and no public visitation will be held. A private memorial service will be announced at a later date. In lieu of flowers, memorial contributions can be made to the Town of Tazewell EMS, 211Center Avenue, Tazewell VA 24651, for the many years of assisting in his care. The family would also like to thank the entire staff of Helping Hands, Chad Hurley RN, and all those that provided care during his illness. The family is being served by the Mercer Funeral Home & Crematory in Bluefield WV.

Timothy Richard Rutherford, 75, died peacefully at his home in North Tazewell, Virginia on Tuesday, March 22, 2022. He was the last surviving member of his immediate family. Born in Bluefield WV, he was the son of the late Earl Forrest... View Obituary & Service Information

The family of Timothy Richard Rutherford created this Life Tributes page to make it easy to share your memories.

Timothy Richard Rutherford, 75, died peacefully at his home in...

Send flowers to the Rutherford family.