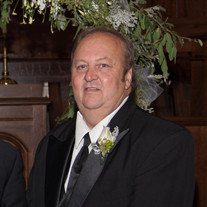 Terry Wayne Brown, 69 of Princeton, WV, died February 18, 2022 in Blacksburg, VA. He was born April 7, 1952 in Coaldale, WV. Terry was a proud resident of West Virginia and spent his entire life living in Mercer County. He dedicated his professional life to Athletics, working as Athletic Director and coaching numerous sports for Bluefield State College for more than 40 years. His love for basketball took him all over the world where he played and recruited talent to join the BSC team. He won a State Championship as a player for the Bramwell Millionaires in 1967 and brought the WVIAC Championship Basketball Championship home to Bluefield State in 1996. He was also named WVIAC Coach of the Year in 1987. Terry retired as BSCs winningest basketball coach and added a Tennis and Golf championship to his list of accolades before stepping away from coaching. He was inducted into Bluefield State College Athletics Hall of Fame in February 2020. “Coach Brown" was known in the community for his accomplishments in sports, but there was no accolade he was prouder of than being a Father and Grandfather. He married his wife, Cheri, in May 1982. He became a father for the first time in March 1983 when his oldest son, Brian, was born. His daughter, Lyndsey, was born in 1989 and youngest son, Bradley, in 1993. He always wanted to give his children experiences that honored Appalachian heritage while showing them what was possible through hard work and determination. Typical Sundays included “cruising" through the backroads of WV and hearing stories about Terry’s childhood growing up in Bramwell. Terry traded in “Coach” for “PawPaw” when he became a grandfather in 2014 with the birth of his granddaughter Macy Mitchem and again in 2018 & 2021 when his grandsons Leo & Max Brown were born. He was at his happiest when he was going on adventures with his grandchildren and watching them all play together. Terry was loved by many; none more than his family who will miss him dearly & will look forward to a time when they are reunited. Terry was preceded in death by his parents, his brothers Albert, David, Eddie, Albert “Skip” Brown, and his sister, Carol Mahaffrey. He is survived by his wife Cheri Brown of Princeton, WV, three children, son Brian Brown and wife Amanda of Atlanta, GA, daughter Lyndsey Mitchem and husband Dwayne of Riner, VA, son Bradley Brown of Princeton, WV; three grandchildren Macy Mitchem and Leo & Max Brown; his sister Anna-Sue Wise of Fayetteville, NC; along with nieces, nephews, and cousins. Terry’s services will be held at Mercer Funeral Home Thursday, February 24, 2022 at 1:00 p.m. with Pastor Ronnie Tote officiating. The family is allowing a public visitation at 12PM. Burial will follow at Roselawn Memorial Gardens in Princeton. The family would like to request that social distancing be acknowledged and requests that masks be worn at all times during services. Those wishing to share memories or condolence messages with the family may do so by visiting www.MercerFuneralHome.com Mercer Funeral Home & Crematory is serving the Brown family.

The family of Terry Wayne Brown created this Life Tributes page to make it easy to share your memories.

Send flowers to the Brown family.