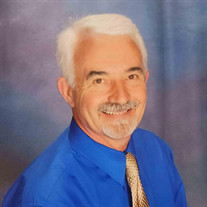 Steve A. Warf, 67, of Bluefield, WV passed away on September 18, 2021 at his home after a long and courageous battle with brain cancer. Born March 21, 1954 in Bluefield, WV, he was the son of the late Isaac (Jake) and Sue Ella Warf. Steve’s long career with JCPenney began at the downtown store in Bluefield where he was hired as a part-time associate. From there, he held various store and district positions in several states, eventually coming back home to manage the Bluefield store where he would retire in 2013. Upon his return to Bluefield, Steve worked with the United Way and the Lion’s Club. He was a member of Westminster Presbyterian Church, where he served as both deacon and elder. He enjoyed his church family and could often be found serving drinks at weekly church dinners. Steve loved sports, especially basketball and golf. His favorite vacation spot was Myrtle Beach, where he spent many weeks with family and friends. In addition to his parents, Steve was preceded in death by his brother, David and his father-in-law, Leslie E. Cox, both of whom he held dear to his heart. Left to cherish his memory include his wife, Kathryn; children Lindsey Warf (Tod Kershaw), Nicholas Warf (Melanie Caldwell), and Patrick Warf; a sister, Barbara Shrewsbury; a grandson, Mica Warf-Kershaw; in-laws, Lena Cox, Kevin and Elaine Cox, Harriet Warf, and several nieces and nephews. A service to celebrate his life will be held at 11:00 a.m. on Saturday, September 25, at Westminster Presbyterian Church with Pastor Jonathan Rockness officiating. A reception will follow in Fellowship Hall. For everyone’s safety, please be mindful of Covid protocols. In lieu of flowers, memorial contributions can be made to Westminster Presbyterian Church or the Union Mission. The family wishes to express heartfelt thanks to their devoted caregivers, Amedisys Hospice and his wonderful friends who truly enriched his life. The family is being served by Mercer Funeral Home in Bluefield, WV.

The family of Steve A. Warf created this Life Tributes page to make it easy to share your memories.

Send flowers to the Warf family.