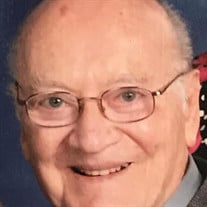 Dr. Steve Joseph Misak II, age 89, longtime resident and former Urologist of Bluefield, WV, died peacefully from natural causes on Friday, June 19, 2020 at his home. Born on February 19, 1931 at St. Michael’s Hospital in Lethbridge, Alberta Canada, he was the son of the late Steve J. Misak I and Irma (Kapi) Misak, Hungarian immigrants. He graduated from the University of Alberta (Edmonton) School of Medicine in 1955. He completed his internship in Calgary, Alberta Canada from 1955-1956. He practiced General Medicine in Lethbridge, Alberta Canada from 1956-1958. He completed his specialty and residency at McGuire Veterans Hospital in Richmond, VA. He then moved his family to Bluefield, WV in 1963 to start his own Urology practice at the former Bluefield Sanitarium. He continued his Urology practice at the Bluefield Regional Medical Center where he served as Chief of Staff. He retired from his Urology practice in 2000. In addition to his parents, he was preceded in death by two sisters: Irene Danek and Sarah Dutchyshen; and two infant grandsons. He is survived by his wife of 46 years, Debbie Misak, and their daughter, Stephanie Misak, both of the home; his first wife, Mary Misak of Bluefield, WV, and their children: son, Byron Misak of Tazewell, VA, daughter, Ramona Hall and her husband, Jerry of Charlotte, NC, son Eric Misak and his wife, Kimberly of Raleigh, NC, and son, Darrell Misak and his wife, Karen of Pittsburgh, PA; brothers, Lesley Misak of Calgary, Alberta Canada and Alex Misak of Lethbridge, Alberta Canada; 3 grandsons, 5 granddaughters, and several nieces, and nephews. Funeral services will be held Monday June 22, 2020 at 11:00 a.m. at Mercer Funeral Home in Bluefield, WV. The family will receive friends on Monday from 10:00 a.m. until the service hour. Burial will follow at Grandview Memory Gardens in Bluefield, VA where family and friends will serve as pallbearers. In lieu of flowers, memorial contributions, if desired, may be made to First United Methodist Church prayer room, 200 S. College Avenue, Bluefield, VA 24605 Those wishing to share memories or condolence messages with the family may do so by visiting www. MercerFuneralHome.com Mercer Funeral Home & Crematory is serving the family of Dr. Steve Joseph Misak, II.

The family of Dr. Steve Joseph Misak II created this Life Tributes page to make it easy to share your memories.

Send flowers to the Misak family.