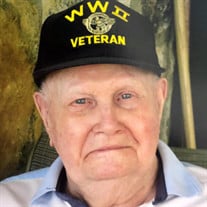 Bluefield, VA- Robert Lee Sexton, 95 of Bluefield, VA, went to be with his Lord and Savior while holding hands with his wife and daughter. Robert was born May 28, 1925 in Bluefield, VA to the late Jake and Maggie May Sexton. He attended schools in West Graham, VA. Robert was a World War II veteran having served with the 41st Infantry Division in the Asiatic Pacific. He was wounded in action and spent 19 months recuperating in the hospital. Robert was the recipient of the Purple Heart and various other medals. On returning home, he attended McClain’s Business College on the GI Bill. He retired in 1983 from Skyline Motors as the President and Owner. He was the first Honda dealer in the area. Robert was a member of Trinity United Methodist Church. He was also a member of the American Legion, Riley-Vest Post #9, Bluefield Elks Lodge, where he was Elk of the Year in 1992, and the V. F. W. In addition to his parents, he was preceded in death by his sister, Elizabeth Anne Compton who had lived in Cincinnati, OH. Survivors include his wife, Rachel D. Sexton of Bluefield, VA; daughter, Kathy Lynn Sexton Pontius and husband Jay of Fort Collins, CO; granddaughters, Victoria Gage of Denver, CO, and Sarah Pontius of Fort Collins, CO; one great-granddaughter, Katelyn Sophia Gage, who is the apple of his eye, of Denver, CO; and many nieces and nephews. The family would like to thank Hospice Compassus for the tender, loving care that they provided. Private funeral services and burial will be held at Grandview Memory Gardens on Tuesday May 4, 2021 with Mr. Craig Hammond officiating. Military graveside rites will be conducted by members of the Mercer County Veterans Honor Guard. In lieu of flowers, memorial contributions in his name may be made to a charity of one’s choice. Those wishing to share memories or condolence messages with the family may do so by visiting www.MercerFuneralHome.com Mercer Funeral Home & Crematory is serving the family of Mr. Robert Lee Sexton.

Bluefield, VA- Robert Lee Sexton, 95 of Bluefield, VA, went to be with his Lord and Savior while holding hands with his wife and daughter. Robert was born May 28, 1925 in Bluefield, VA to the late Jake and Maggie May Sexton. He... View Obituary & Service Information

The family of Robert Lee Sexton created this Life Tributes page to make it easy to share your memories.

Send flowers to the Sexton family.