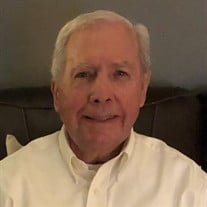 Robert (Bob) Martin Mustard, 86, of Bluefield, WV passed away on Monday, April 25, 2022 at his home with his son Mark by his side. Born on July 6, 1935, he was the son of the late Charles William and Grace Cundiff Mustard. Bob grew up in Bluefield and graduated from Bluefield High School, Class of 1953. He furthered his Education at Concord College and eventually joined his Father’s Business, Mustard Equipment Service. Bob later became the Owner and Operator of the Family Business until his retirement in the Mid 1970s. He was dedicated to Community Service and non-Profit organizations his entire life. He was a Philanthropist donating his time as a Master Mason, a Gideon, a member of the Shriners, and was Chairman for many years on the Public Housing Authority Board and volunteered for the Union Mission. Bob was a Member of the Edgemont Baptist Church where he served on many committees. His faith in God and giving back to the Community was very important to him. Bob was an avid golfer and continued to play regularly. He enjoyed meeting his friends weekly for a cup of coffee and fellowship. Bob leaves behind the love of his life, his wife of 67 years Betty Joyce Mustard. Their love story began in 1954 and they were blessed with the first of four sons in 1956. As a young family of 6, Bob and Joyce made their permanent home at 405 Memorial Avenue in April of 1974. Bob and Joyce had a beautiful love story as was witnessed by all that new them. They enjoyed travel. Most of all Bob loved his family, his Sons and their families were near and dear to his heart. He was always there for Support, Love and encouraging words. Bob was the Matriarch to his family and will be dearly missed. He was a wonderful Husband, Father, Grand-Dad, Brother and Friend. In addition to his parents, he was preceded in death by his son, Todd Marvin Mustard, his brother Charles William Mustard II, his in-laws Marvin and Mayme Neel. In addition to his wife, those left to cherish his memory are his sons, Robert (Marty) Mustard II and wife Karen of Bluefield, WV, Mark Mustard and wife Kathi of Bluefield, VA, and Tim Mustard of Raleigh, NC. Bob was blessed with 9 grandchildren, Travis, Paige, Brandon, Matt, Sean, Alex, Savanah, Bailie and Abby. He was also blessed with 9 great-grandchildren, Will, Julia, Lidia, Ben, Evalynn, Amelia, Harper, Jacob and Heidi. Bob is survived by one brother, Tom Mustard of Princeton WV and sister-in-law Lois Mustard of Bluefield, WV. In addition to his family Bob leaves behind many friends whom he cherished, his coffee group, golf companions, his Gideon Group, Bible Study partners, and many other countless friends whom he loved. Funeral Services will be conducted at 2:00 p.m. on Saturday, April 30th 2022, at Mercer Funeral Home in Bluefield, WV with Pastor Chris Roberts officiating. Interment will follow at Woodlawn Cemetery at a later date. The Family will receive friends from 12:00 p.m. Saturday until the Service hour at Mercer Funeral Home.

Robert (Bob) Martin Mustard, 86, of Bluefield, WV passed away on Monday, April 25, 2022 at his home with his son Mark by his side. Born on July 6, 1935, he was the son of the late Charles William and Grace Cundiff Mustard. Bob grew up in Bluefield... View Obituary & Service Information

The family of Robert Martin "Bob" Mustard created this Life Tributes page to make it easy to share your memories.

Send flowers to the Mustard family.