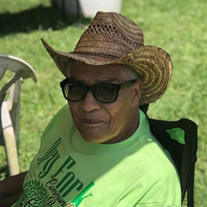 Rocky Gap, VA- Pawell Douglas Saunders, Sr., 86, of Rocky Gap, VA, died Tuesday August 20, 2019 at Roanoke Memorial Hospital. Born March 27, 1933 in Rocky Gap, he was the son of the late Fred Jackson Saunders and Estella Ferguson Saunders. Mr. Saunders was a retired Brakeman for Norfolk & Southern Railroad and was a veteran of the U.S. Army, having served in the Korean War. He was a member of Tynes Chapel A.M.E. Zion Church in Rocky Gap. Mr. Saunders was a cowboy. He had a passion for farming and riding horses. He was a gifted man who had many talents: a brilliant rock layer, a story teller, a boxer, and a family historian. Most importantly, he was a loving husband and father who was devoted to his family. He had also been called into ministry, and had pastored a church and shared his loved of God. In addition to his parents, he was preceded in death by his son, Pawell D. Saunders, Jr. Survivors include his dedicated wife, Shelia Tucker Saunders; eight children, William Fred Saunders and wife Shirley, Pandora Saunders-Simpson, Tonya Mann and husband Jon, Monique Kerney and husband Maurice, Sonya King, LaTosha Saunders, Lakisha Saunders, and Tashell Mitchell; daughter-in-law, Darlene Saunders; sisters, Minnie D. Harris and Christin McClanahan; and a host of grandchildren, great-grandchildren, relatives, and friends. A Homegoing Celebration will be held at Mercer Funeral Home on Saturday August 31, 2019 at 2:00 p.m. with Rev. Marviene Johnson officiating. The family can also be reached at the home of Pandora “Fearne” Saunders-Simpson, 5464 Dryfork Road, Rocky Gap, VA or by calling (919) 605-5272. In lieu of flowers, memorial contributions may be made to his grandson, Lamar Saunders who was in a severe accident while traveling to visit him in the hospital in Roanoke.

The family of Pawell Douglas Saunders created this Life Tributes page to make it easy to share your memories.

Send flowers to the Saunders family.