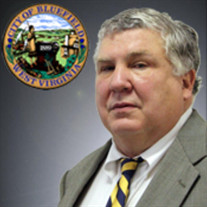 Prominent Bluefield Trial Attorney and City Councilman Dies at the Age of Sixty-Nine Bluefield, WV- Michael Fielding “Mike” Gibson, passed away on February, 27, 2018 at the age of sixty-nine. Born on October 8, 1948, in Gallipolis, Ohio, to Robert Gibson and Louise Holzer, he is survived by his son John Gibson, and sister Lisa Brink Williams, her husband Theodore Williams, and niece and nephew, Anna Williams and Theodore Williams, Jr. A graduate of Woodberry Forest School and The College of William and Mary, he received his legal education at the T.C. Williams School of Law at the University of Richmond, obtaining his juris doctorate degree in 1973. Following law school, he moved to Bluefield and was a prominent member of the Mercer County Bar for 42 years. In addition to the law, Mike was accomplished in many areas. He was an avid traveler, venturing to Africa, the Amazon, and Australia in the company of his dear friend, Lane Austin. He also enjoyed life outdoors, fishing and canoeing down Wolf Creek in Virginia. He was a gentleman farmer, operating Black Acre Farms in Spanishburg, West Virginia, where he raised Angus and Belted Galloway cattle. In later years, Mike devoted himself to a life of public service. He was a passionate advocate for the growth and development of his home, Bluefield, WV. At the time of his passing he was serving his second term as representative of the 3rd District on the Bluefield City Board of Directors. Michael will be fondly remembered not only by his family and friends, but also by the thousands of clients he diligently and professionally served in his forty-two years as a member of the Mercer County Bar Association. The hard work, preparation, style, and relentless drive he portrayed at trial will be remembered and replicated by the many attorneys who worked and practiced under his tutelage. Most of all, Michael’s greatest and proudest achievement was being the best father to his son John, whom he loved more than anything in the world. There will be a Celebration of Life gathering at the Bluefield Arts Center on Friday, March, 9th at 7 p.m. In lieu of flowers, please make donations to the Bluefield Union Mission, 2203 Bluefield Avenue, Bluefield, WV 24701 or to the Bluefield Arts Center for the ceremony in his honor, 500 Bland Street, Bluefield, WV 24701. Those wishing to share memories or condolence messages with the family may do so by visiting www.MercerFuneralHome.com Mercer Funeral Home & Crematory is serving the family of Michael Fielding Gibson.

The family of Michael F. Gibson created this Life Tributes page to make it easy to share your memories.

Send flowers to the Gibson family.