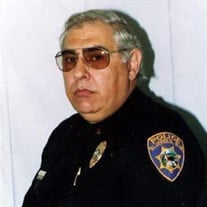 Bluefield, WV- Joseph Michael Pullano, Jr., 81, of Bluefield, WV, died Wednesday January 13, 2021 at Bluefield Regional Medical Center. Born September 21, 1939 in Bluefield, he was a son of the late Joseph Michael Pullano, Sr. and Genoveffa “Jennie” Soluri Pullano. Mr. Pullano was a member of Sacred Heart Catholic Church and was a member of the last graduating class of Beaver High School in 1957. He retired as Lieutenant from Bluefield Police Department after 33 years of service, and had also served as acting chief for several months. He was a member of F.O.P. Lodge #80 where he served as President for several years. Mr. Pullano enjoyed sports, and especially enjoyed following the New York Yankees and West Virginia Mountaineers. In addition to his parents, he was preceded in death by his wife Brenda Jean Combs Pullano; and a brother, Nicholas J. Pullano. Left to cherish his memory are his daughter, Gina Pullano; Sofie, his fur baby Yorkie; niece, Anita Lisk; nephew, Nick Pullano, Jr., and cousin, Frank Guadadiello; and a host of other cousins. A memorial service will be held on Saturday January 16, 2021 at Mercer Funeral Home at 2:00 p.m. The family will receive friends from noon until the service hour. In lieu of flowers, memorial contributions may be made to your favorite animal charity, St. Judes Childrens Research Hospital, Bluefield Union Mission, or Sacred Heart Catholic Church. Those wishing to share memories or condolence messages with the family may do so by visiting www.MercerFuneralHome.com Mercer Funeral Home & Crematory is serving the family of Joseph Michael Pullano, Jr.

The family of Joseph Michael Pullano Jr. created this Life Tributes page to make it easy to share your memories.

Send flowers to the Pullano family.