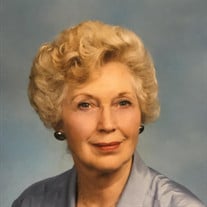 Eugenia (Genie) Hughes Hancock, age 99, died peacefully at home in Shepherdstown WV on March 20, 2020. She leaves her daughter Anne Hancock Teresa of Shepherdstown WV, her grandson Benjamin Teresa his wife Erica Sims and great-granddaughter Eleanor of Richmond VA, and granddaughters Hannah and Sarah Hancock Rubinsky of Nyack NY. She is predeceased by her husband Frank T. Hancock of Bluefield, daughter Rev. Dr. Eugenia Lee Hancock of Nyack NY, son-in-law Dr. Joseph G. Teresa of Shepherdstown WV, and her brother Major General John (Jack) Hughes. Born to James Omar Hughes and Mittie Scarborough Hughes in Marshall TX, she was raised in Forth Worth and graduated from the University of North Texas in Denton with a Bachelor of Music degree. She met and married Frank Hancock in 1944 in Fort Worth where he was stationed during WWII. After he shipped overseas Genie worked in New York City as a runway model, a singer with the Robert Shaw Chorale, a soloist at St. Mary's Episcopal Church, and a volunteer with the USO, checking the military postings every day on the pier for when his ship would come home. After the war they moved to Lewisburg WV and then to Bluefield where she lived for 60 years. A talented and enthusiastic voice and choral teacher, Genie worked as Choral Director at Graham High School in Bluefield VA, a Voice Instructor at Bluefield College, and a vocal coach and choir director for individuals and her church, First Presbyterian Church of Bluefield. After retiring from teaching she became a realtor and manager of the Commercial Department of Citizens Real Estate in Bluefield. Genie served in many organizations in the Bluefield area but her heart belonged to the Community Concert Association (now Blue Mountain Performing Arts) which she helped establish in 1955 and shepherded for more than 30 years as either president or vice-president. She was distinguished as the first woman president of the Greater Bluefield Chamber of Commerce, the president of Main Street America, and co-founder of the Chamber of Commerce's annual Reading Bee. She was named a Paul Harris Fellow by the Bluefield Rotary Club, received the Distinguished Citizens Award from the American Legion, and the Athena International Leadership Award for Outstanding Women. Genie was the first woman to be installed as Moderator of the Presbytery of West Virginia and served as both an Elder and a Trustee of First Presbyterian Church where she taught an adult Sunday school class for over twenty years. Genie's boundless curiosity of mind nurtured family, friends and every cat she ever met with her joyful embrace of life, food, faith, music and exquisite gardens. Her life long love affair with all people and the whole natural world continued after she relocated to Shepherdstown to live out her generous life with her daughter Anne and their many loving friends. In lieu of flowers memorial contributions may be made to First Presbyterian Church, Bluefield WV; the Community Foundation of the Virginias - Hancock Scholarship Fund; or the Land Trust of the Eastern Panhandle. Those wishing to share memories or condolence messages with the family may do so by visiting www.MercerFuneralHome.com Mercer Funeral Home & Crematory is serving the family of Eugenia (Genie) Hughes Hancock.

The family of Eugenia Hughes Hancock created this Life Tributes page to make it easy to share your memories.

Send flowers to the Hancock family.