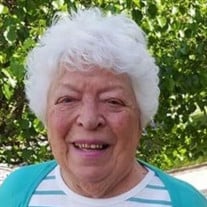 Bluefield, WV – Elizabeth Ann Lowman Hale Boykin died at her residence February 27, 2022. Liz Ann was born March 10, 1925 to the late David Thomas Lowman, Sr. and Mary Elizabeth Kahle Lowman. During the depression, her family moved in with her widowed aunt, Kathleen Peck and her five children, Katherine, Mary, Rachel, Charles, and David. They were raised as brothers and sisters. In1926, she was the first baby to be baptized at Westminster Presbyterian Church. In 1942, she graduated from Beaver High School and then attended Bluefield College and West Virginia University. In 1946, she graduated from Duke University Medical Center. She was registered with the American Society of Chemical Pathologists. As a young woman, she ran the lab at Princeton Memorial Hospital in Princeton, WV. After her children were born, she worked for Dr. R.H. Fowlkes, Dr. Otis King, and Dr. James McGee as a lab technician. Liz Ann married her first husband, Charles B. Hale on October 8, 1949. The had two children and lived happily in Bluefield, then Richlands, VA, then back to Bluefield until he passed away in 1980. In 1985, she married her second husband, Lemuel W. Boykin and they moved to Richmond, VA for ten years and then moved back home to Bluefield. He passed away in 2005. She was a long-time member of First Presbyterian Church in Bluefield and was a very active and vocal member. She volunteered at the Union Mission thrift store in the West Virginia Manor where she made many friends. For many years, she volunteered as a counselor at the Easter Seal Camp for the handicapped in Glenwood. She never met a stranger and was loved by all who met her. She had lunch once a month with her classmates from Beaver class of 1942 until the disbanded in 2020. Liz Ann is survived by her son, Charles Broderick Hale, Jr. (Lynn Diane) of Leland, NC; daughter, Mary Lew Thomas (Hunter Jr.) of Bluefield; brother, David Thomas Lowman, Jr. (Jean) of Chester, VA; grandson, Hunter Thomas, III (Jessica); great-grandson, William Hunter Thomas, IV; and several nieces, nephews, and step-granddaughters. There will be a celebration of life at First Presbyterian Church, Bluefield, WV, on Monday March 7, 2022 at 1:00 p.m. with Mr. Craig Hammond officiating. The family will receive friends from noon until the service hour. The family requests that memorial contributions be made to either First Presbyterian Church or to the Bluefield Union Mission. Those wishing to share memories or condolence messages with the family may do so by visiting www.MercerFuneralHome.com Mercer Funeral Home & Crematory is serving the family of Mrs. Elizabeth Ann Lowman Hale Boykin.

The family of Elizabeth Ann Boykin created this Life Tributes page to make it easy to share your memories.

Send flowers to the Boykin family.