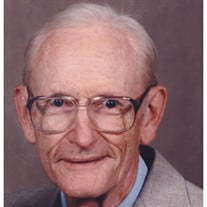 Edwin Gratton “Dick” Royall, 98, of Bluefield, WV died peacefully on Sunday, August 9, 2020 at home surrounded by family and friends. Dick was the youngest son of Virginia State Senator John Powell Royall and Jennie Bowen Royall. He was born in Tazewell, VA on June 3, 1922 and was the last surviving member from a loving and caring family of nine children. Mr. Royall was preceded in death by sisters Chris Elmore, Rachel Royall, Jane Phlegar and Ellen Story and brothers Powell, Bowen, Archer and Sam. Dick graduated from Bluefield College. After the war, he was admitted to the University of Virginia in 1946. However, he was unable to attend due to unavailable housing. He then attended West Virginia Business College. He later completed his education as a graduate of the Stonier Graduate School of Banking at Rutgers University. Mr. Royall served his country in the US Army during World War 2 for three years. After basic training, he attended New York University in an Army Specialized Training Program before being deployed to the European Theatre in France, Germany and Czechoslovakia where he was a Squad Leader and a Combat Infantryman with the 16th Armored Division, 79th Infantry Division and the 1st Infantry Division. He was employed by Flat Top National Bank (now First Community) retiring as an AVP/Internal Auditor after 33 years of service. Mr. Royall was a Director of National Screen Company in Suffolk, Virginia and a Managing Partner of the M. Lou Bowen Kroll, L.L.P. in Tazewell, Virginia. Mr. Royall was an active member of the First Christian Church of Bluefield serving on the finance committee, deacon and member of the Men’s Work Day Team. Prior, he was a member of Bland Street United Methodist Church serving as an usher and the audit team. He was a former member of Fincastle Country Club for 39 years. Also, he was a member of the American Legion and South Bluefield Kiwanis Club. Survivors include his wife of 70 years, Martha Spangler Royall, daughter Connie Akers and husband Bill of Bluefield, Virginia, grandson Christopher Michael Akers and wife Hillary, great grandchild Aniston, of Bristol, Virginia, granddaughter Sarah Kathryn Akers of Alexandria, Virginia, nieces, nephews, and special relatives Kay and Kenny Rice, Jeanne and Alan Hillman, John and Heather Royall, Susan and Randall Whittaker, Bill Shaner, and Jennie and Colin Monette. Dick was a loving, caring and devoted husband, father, grandfather, great grandfather and brother. His greatest joy was spending time with his family. His pride and joy were his grandchildren Christopher and Sarah and great grandchild Aniston. Dick was always glad to help people in need. He loved to travel and his favorite places being Sea Island, the western part of the United States, and Lucerne, Switzerland. The family would like to give a thank you to caregivers, Gay, Carolyn, Jackie, Debra and Laura, Amedysis Home Health workers Tiffany, Pam, Brian, Sarah, Matilda and Joe and Amedysis Hospice. Also, a special thanks to his primary health provider Kim Matzel. Funeral services will be conducted Saturday, August 15, 2020, at 11:00 AM at First Christian Church of Bluefield, WV on Bland Road. Visitation will be an hour prior to the service. Pastor Doug McDaniel will officiate. Burial will follow at Monte Vista Cemetery. In lieu of flowers, memorial contributions if desired may be made to the First Christain Church or the Bluefield Union Mission.

The family of Edwin Gratton “Dick” Royall created this Life Tributes page to make it easy to share your memories.

Send flowers to the Royall family.