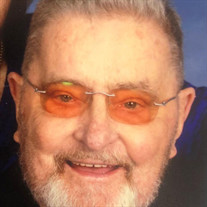 BLUEFIELD, VA - Dewey “DG” Gilmer Lusk, Jr., 81, of Christiansburg, VA, passed away on Monday, September 13, 2021 at Carilion Tazewell Community Hospital in Tazewell, VA. A native of Glyn Lyn, Va, he was the son of the late Dewey Gilmer Lusk, Sr. and Eva Dent Lusk, both of Spanishburg, WV. DG was first and foremost a kind, loving Christian. He graduated from Narrows High School in 1958 where he played football and baseball. There, he met his beloved wife of 62 years, Patty Cunningham. Together they have two children, Dewey “Gil” Gilmer Lusk, III and Shari "Sissy" Lusk Custer; Daughter-in-law Mily Dover Lusk, son-in-law Kenny Custer, Jr, and "second son" Stevie Allen. They were blessed with four grandchildren, Dewey “Gil” Gilmer Lusk, IV, Landi Lusk (along with boyfriend, Steven Mitchell), Kenny Custer, III (along with fiancée, Amanda Reinartsen), and Karly Custer. DG loved his family with all his heart and was affectionately called “Dada G” or "Daddy G" by his grandchildren. He was a close friend and colleague to countless people. He graduated from Virginia Polytechnic Institute in 1962 with a degree in Building Construction and started his own successful business of over 30 years, Structures & Utilities Co. Inc. DG loved watching his children and grandchildren perform and play sports. He was a die-hard Hokie. He never missed his son Coach Lusk’s Bluefield University football games. He spent many afternoons watching baseball with a good chew. He loved singing every morning, golfing and fishing, watching history documentaries, and telling stories to his grandchildren. He had a lighthearted sense of humor that remained with him even during his illness, and a selfless and optimistic heart that was apparent throughout his entire life. His dog, Sadie, was his loving companion. In lieu of flowers, the family requests donations to Montgomery County Humane Society or Montgomery County Animal Shelter in Christiansburg, VA. A Celebration of Life will be held at St. Paul United Methodist Church, 220 W. Main Street, Christiansburg, VA 24073, on Sunday September 26, 2021 at 3:00 p.m. where he was a life-long member and attended F. R. Wickham Sunday School class, alongside many special friends. A time of fellowship will be held following the Celebration of Life.

The family of Dewey "DG" Gilmer Lusk Jr. created this Life Tributes page to make it easy to share your memories.

Send flowers to the Lusk family.