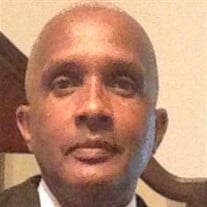 White Plains, MD- Cornell DeShane Wade, 61, of White Plains, MD, died Saturday March 2, 2019 at George Washington University Hospital in Washington, D.C. Born November 3, 1957 in Wilco, WV, he was a son of the late James Robert Wade and Elizabeth Johnson Wade. He was a member of Mt. Ennon Baptsit Church in Clinton, MD. Mr. Wade was retired as a Technician for Verizon, and at the time of his death was working as a teacher and track coach at Henry E. Lackey High School in Charles County, MD. In addition to his parents, he was preceded in death by a brother, Russell Wade. Survivors include his wife, Jennifer F. Wade of White Plains, MD; one daughter, Jennell Wade of Memphis, TN; three sisters, Amelda Johnson (Marvin), Verona Wade of Chicago, IL and Marilyn Harris (Dennis) of Charleston, WV; brothers, Robert Wade of Gary, WV, Alphonso Wade of Bluefield, WV, and Keith Wade (Seaondra) of Charleston; and numerous nieces, nephews, and devoted friends. A funeral service will be conducted at Mercer Funeral Home Chapel on Friday March 8, 2019 at 2:00 p.m. with Rev. Garry Moore officiating. The family will receive friends on Friday from 1:00 p.m. until the service hour. Entombment will follow at Restlawn Memorial Gardens where nephews will serve as pallbearers. Those wishing to share memories or condolence messages may do so by visiting www.MercerFuneralHome.com Mercer Funeral Home & Crematory is serving the family of Mr. Cornell DeShane Wade.

The family of Cornell DeShane Wade created this Life Tributes page to make it easy to share your memories.

Send flowers to the Wade family.