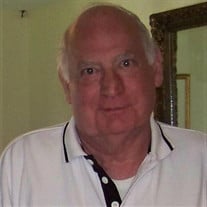 Billy Lee Cole, 79, of Princeton, WV, passed away on February 25, 2022. Bill was born on July 15,1942, to the late Violet Marie and Willie Hoge Cole. In addition to his parents, he was preceded in death by his brothers, Bernard Cole, Willie Cole Jr., and sister Pat Jackson. He was married to his wife, Neta Gayle Allen Cole, for 61 years and was a devoted dad to his five children, Sheila Beggs (Everett Lee Beggs Jr.), Roger Cole (Sherry Short), Keith Cole (Ann Fike), Becky Cole, and Billy Cole (Paula Brooks). He was known as PawPaw by his grandchildren, who meant the world to him. Brennen Goldman (Tiffany Goldman), Brittany Beggs, Cameron Goldman, Cody Beggs, Dustin Goldman, Megan Beggs, Hunter Cole, Tobias Cole, Marcus Cole, Josie Cole, Annabelle Cole and a great grandson, Cayde Goldman. Bill is survived by his sister Joyce Messer (Bill Messer), sister Shirley Dillow, and numerous nieces and nephews. Special appreciation to a few of his many friends including Bob, Larry, Doug, and Kenneth. Bill began working early in life as an independent mover, worked in asphalt and paving, became a factory-trained Volvo and Datsun mechanic, and worked for Richardson Motors. In 1976 and until retirement, Bill was a successful independent businessman with Bill’s Auto Repair in Bluefield, WV. He was frequently the go-to mechanic for foreign car repair because he could fix just about anything. Bill often worked with customers in need and bartered for services in lieu of payment. He understood that a vehicle was often the lifeline to survival for families. His mantra was providing good service for a fair fee. In post-retirement, Bill spent over a decade working for the Food Bank of Virginia where he provided equipment and labor to supply food for the community. He frequently delivered food to shut-ins who were not able to travel to the food bank. His drive came from helping people in need. He was the cornerstone of the family who loved celebrations of family accomplishments, which brought him tremendous joy. After each gathering, he would express how much he enjoyed the occasion and would inevitably say he gained five more pounds from all the food. Services will be Wednesday, March 2, 2022, at Mercer Funeral Home. The family will receive friends from 12:00 -1:00 PM. Funeral services will be held from 1:00 -2:00 PM, with graveside services immediately following at Roselawn Memorial Gardens in Princeton. His grandsons will have the honor of serving as pallbearers. The family wishes to express deep gratitude to the ICU unit at Roanoke Memorial Hospital for their endless support and care. In lieu of flowers, contributions may be made to Feed America which ensures food for people in need. https://secure.feedingamerica.org

Billy Lee Cole, 79, of Princeton, WV, passed away on February 25, 2022. Bill was born on July 15,1942, to the late Violet Marie and Willie Hoge Cole. In addition to his parents, he was preceded in death by his brothers, Bernard Cole, Willie... View Obituary & Service Information

The family of Billy Lee Cole created this Life Tributes page to make it easy to share your memories.

Billy Lee Cole, 79, of Princeton, WV, passed away on February...

Send flowers to the Cole family.