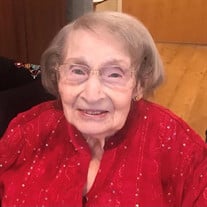 Psalm 90:1 Lord, thou hast been our dwelling place in all generations... Audrey Angela Gibson Shrader went home to be with her Lord and Savior Jesus on February 12, 2022 at age 100. Born on November 18, 1921 in Rocky Gap, Virginia, she was the daughter of the late William H. Gibson and Mary Richardson Gibson. Her childhood was spent in Bland County, a place she loved and called home her entire life. Audrey took great pride in being known as a “country girl.” In early years on the family home place during the Great Depression, she would feed the chickens, milk the cow, churn butter, tend the gardens and can vegetables. Her family affectionately referred to her as a “Pioneer Woman” later in life, a title she cherished. She met her future husband, Watha, batting her twinkling blue eyes on a hayride in Bland County. Later, living on Wolf Creek provided a sanctuary combining the healing properties of moving water and a solace that only God’s nature can provide. She came to Bluefield and enrolled in the newly formed St. Luke’s certified nursing assistant program in 1945. The Gibson Girl could keep an eye on her new boyfriend, Watha, a WWII Navy veteran, who was working across the street at the Stowers Garage. They married in 1949 and raised three children in Bluefield. Audrey also worked in the office of Dr. Otis King and at the downtown Bluefield Leggett’s Department Store specializing in Lingerie. She was active in the Bailey Memorial Baptist Church as a teacher in children’s Sunday school and vacation bible school. In later life she was fondly called Nana by friends and family, as sweet as the chocolate covered cherries she so loved. As she gracefully aged Audrey was determined to make the Today Show’s centurion Smuckers jar, an honor she achieved this past November. As she often said, her key to longevity was a peanut butter sandwich everyday. In addition to her parents, she was preceded in death by her brothers Ed, Luther and Bernard Gibson; sisters Virgie Gibson Neal and June Gibson Hoosier; her beloved husband of 60 years Hiram Watha Shrader; two sons Ronald Dean Combs and Donald Ray Shrader and son-in-law Dr. J. Elliott Blaydes, Jr. Audrey is survived by her devoted daughter Anita S. Blaydes of Bluefield, WV; daughter-in-law Judy Mann Shrader of Pembroke, Virginia; granddaughter Jaime Blaydes Gilliam (Randy) of Browns Summit, North Carolina; grandsons Brandon Mann Shrader of Pembroke, Virginia, Richard “Pete” Combs (Mary) and Robert Combs of Gaston, South Carolina; great grandchildren Zachary Combs and Amber Combs, of Gaston, South Carolina. She is also survived by several special nieces and nephews. Additional beloved family include Betty Boyd Lewis, Steve and Kathleen Blaydes and special furry friend Tyger. The family would like to thank the staff of the Mercer Nursing Home and particularly the love and compassion of her longtime companion caretakers: Deborah Wooley, Linda Caywood, Ramona Robinson, Lisa Neal and special friend Kaki Roach. A service to celebrate Audrey’s life will be held on Wednesday, February 16 at 12:00 at Mercer Funeral Chapel, Bluefield, West Virginia. The family will greet friends at 11:00 prior to the service. A graveside burial will follow the memorial in the Shrader Family Cemetery Niday, Virginia on Wolf Creek. In lieu of flowers the family requests donations be made to the charity of your choice. Accept our thanks kind Father for these and all our blessings. Forgive us our sins and save us for Christ’s sake. Amen

Psalm 90:1 Lord, thou hast been our dwelling place in all generations... Audrey Angela Gibson Shrader went home to be with her Lord and Savior Jesus on February 12, 2022 at age 100. Born on November 18, 1921 in Rocky Gap, Virginia, she was the... View Obituary & Service Information

The family of Audrey Shrader created this Life Tributes page to make it easy to share your memories.

Psalm 90:1 Lord, thou hast been our dwelling place in all generations...
Audrey...

Send flowers to the Shrader family.