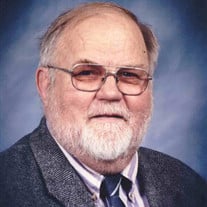 Bluefield, VA - Allen Abner Jonas of Bluefield, VA died Sunday, February 11, 2018 at his home on Mountain Lane. Born April 7, 1932 in Becker County, MN, he was the son of the late Abner Bastian Jonas and Josephine Hilder Harju. In addition to his parents he was preceded in death by his wife of 33 years, Anne Buffat Jonas and his brother Abner Jonas (Kathleen). Survivors include his loving wife of 20 years, Dorothy Jonas, sister, Joan Jonas Enger (John) of Powell, WY, daughter, Katherine Jonas of Chattanooga, TN, son, David Jonas of Atlanta, GA, and three step-sons Dusty Gess (Charlotte) of Bluefield, VA, John Gess (Brenda) of Blacksburg, VA, and David Gess (Rebecca) of Barboursville, VA. Allen was a Professor of Art at Bluefield State College for 25 years (1969-1994), having a BA in Economics and Political Science from Concordia College, an MA in Art from the University of Iowa, and a MFA in Painting from the University of Cincinnati. He was an active member in the National Art Education Association, the West Virginia Art Education Association, and the College Art Association. Allen was an exchange professor with the Bluefield State College Center for International Understanding, travelling to China on three occasions and hosting many visiting scholars at his home with his wife Dorothy. Allen has been an active member at Westminster Presbyterian Church of Bluefield, WV for over 45 years, serving there as both a deacon and an elder. The family will receive friends from 6:00-8:00pm on Tuesday, February 13, 2018 at Mercer Funeral Home and Crematory. Funeral services will be conducted at 11:00am on Wednesday February 14, 2018 at Westminster Presbyterian Church. Burial will follow at Grandview Memory Gardens. Pallbearers will be family and friends. In lieu of flowers, the family suggests that memorial donations be made to a favorite charity. Those wishing to share memories or condolence messages with the family may do so by visiting www.MercerFuneralHome.com Mercer Funeral Home of Bluefield is serving the Jonas family.

The family of Allen Abner Jonas created this Life Tributes page to make it easy to share your memories.

Send flowers to the Jonas family.